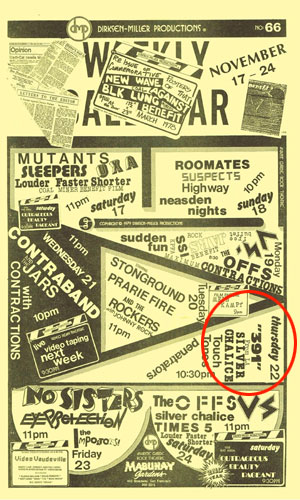 In the wake of the breakup of The Nuns' original lineup, most of its members quickly and inevitably went on to form new groups. In contrast to the confrontational punk aesthetic of The Nuns, Jeff Olener headed in a decidedly -- some would say crassly -- commercial direction with his next project, 391. The band featured a few other ex-Nuns plus one Brett Valory, brother of Journey's bassist. "They sounded to me like they wanted to be Journey," laughs Chris Knab. He wasn't a fan of the group's music and didn't think it deserved a place on the compilation. "I was just saying, 'This is really horrible shit,'" he recalls. "'This isn't 415 stuff.'" But he didn't push the issue.