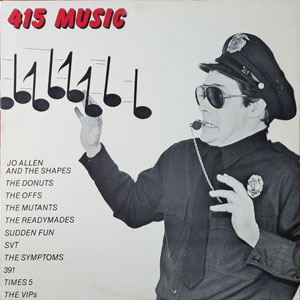 By a few months into the new decade, 415 Records had established itself as a modestly successful -- though not especially profitable -- independent record label with a half dozen or so 7-inch releases. While its small but growing catalog didn't present the entire range of Bay Area music -- it was never intended to do so -- records by The Nuns, The Offs, The Impostors, Pearl Harbor and the Explosions and SVT underscored the point that the San Francisco scene was a creatively fertile and varied one.

A logical step, it seemed, would be to put together a compilation album, one that also drew from the current musical offerings of the Bay Area. Howie Klein conceived of the 415 Music compilation as a kind of market research experiment, not unlike what he was doing when he played a new recording on his radio shows. "We were eager to put out a song [by an artist] and maybe see if it's worth doing an album," he says. And placing a band's track on 415 Music seemed like a good first step, "a safer way to do it than to experiment with someone's career," he says with a chuckle.