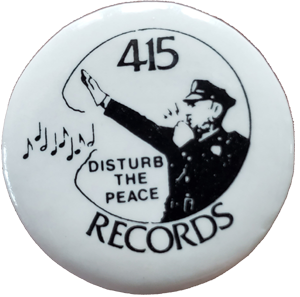 In 1989, radical leftist industrial hip-hop collective Consolidated released its debut EP. The second track on ¡Consolidated!, "Howie Livin'" features an audio snippet of a voice mail message. The speaker is Howard "Howie" Klein, and at the time of the EP's release, Klein was in his early forties and a music industry bigwig: President of Reprise/Warner Brothers Records. The thematic center of gravity of "Howie Livin'" is Klein's rhetorical question: "If music is just inspired by a desire to make money, how interesting could it really be?"

That quote could well have served as the rallying cry for San Francisco-based 415 Records. Launched in 1978, the independent label would champion new wave (and to a more limited extent, punk) coming out of the Bay Area and beyond. Measured in strictly commercial terms, 415 Records was at best a modest success. But then, for Klein and his founding partner Chris Knab (owner of the city's Aquarius Records shop), financial gain was never the primary goal. Ask him about his objectives, and he'll tell you: "F-U-N," He'll say. "It was all about fun."

But 415 Records would have a lasting impact, one that extended far beyond the minor chart action that a few of the label's artists achieved. Klein and his cohorts established new ways of doing business in the music industry, and were at the forefront of a resurgence of independent labels.

Based on nearly 100 interviews with those who were there, Bill Kopp's Disturbing the Peace is the story of 415 Records.