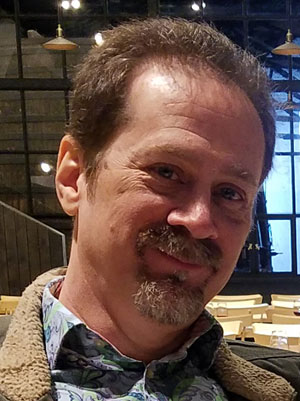 The short version...
With a background in marketing and advertising, Bill Kopp got his professional start writing for Trouser Press. After a stint as Editor-in-chief for a national music magazine, Bill launched Musoscribe in 2009, and has published new content every business day since then (and every single day since 2018). The interviews, essays, and reviews on Musoscribe reflect Bill's keen interest in American musical forms, most notably rock, jazz, and soul. His work features a special emphasis on reissues and vinyl. Bill's work also appears in many other outlets both online and in print. He also researches and authors liner notes for album reissues -- more than 30 to date -- and co-produced a reissue of jazz legend Julian "Cannonball" Adderley's final album. His first book, Reinventing Pink Floyd was published by Rowman & Littlefield in 2018, and in paperback in 2019. His second book, Disturbing the Peace: 415 Records and the Rise of New Wave, will be published in 2021 by HoZac Books.

The slightly longer version...
Depending on one's interest, one is either amazed and entertained or bored to tears with Bill Kopp's encyclopedic knowledge of the popular music of the last fifty years. A rock/pop music historian, he has amassed a collection of way more than 6,000+ albums, nearly half of those on vinyl.

He lives in a nearly century-old house in Asheville, NC with his wife, an impossibly cute little dog, that mountain of vinyl, and way, way, way too many synthesizers and guitars.

And, like everyone else, he's everywhere: Based on nearly 100 interviews with those who were there, Bill Kopp's Disturbing the Peace is the story of 415 Records.