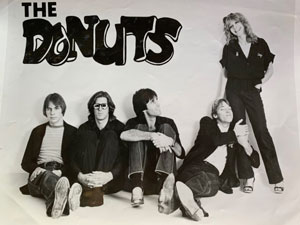 The Donuts were a new wave band first known as Alex the Kat, formed by guitarist (and former dancer with the Tubes) Thom Alexander in 1978. The group impressed Dirk Dirksen and started getting bookings at Mabuhay Gardens. "We were a power pop band," Alexander says. "We were that weird connection before hardcore punk. The San Francisco punk scene was really a strange thing; it really only started about two years after the punk scene was rolling real heavy in New York."

Disturbing the Peace's chapter on The Donuts is based upon interviews with band members Thom Alexander and Lisa Bosch McCormick.