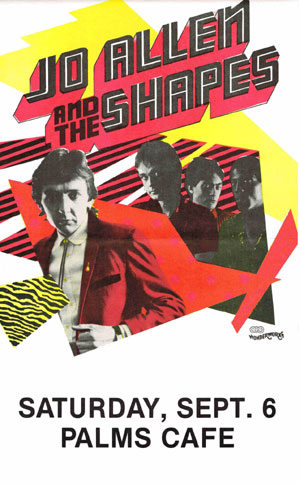 You would be hard pressed to find a more unlikely band than Jo Allen and the Shapes. The idea that a band trafficking in a kind of skinny-tie new wave could have been launched and fronted by a non-singing drummer who had earned his stripes as a member of Chicken Shack and Hawkwind is, on its face, ludicrous.

Chicken Shack was the British blues band that helped propel Christine McVie toward stardom with Fleetwood Mac; another band from the U.K., Hawkwind combined Pink Floyd-style space rock textures and an aggressive biker image closer to Steppenwolf. Neither has any significant connection to new wave, much less punk. And one wouldn't expect an alumni of both of those acts to turn up in the new wave scene of late '70s San Francisco. But that's more or less what happened.

Disturbing the Peace's chapter on Jo Allen and the Shapes is based upon interviews with Alan ("Jo Allen") Powell, plus insights and memories from Greg Beebe, and 415 Records co-founder Chris Knab.