News and updates about Disturbing the Peace

Yesterday was a remarkable experience. At the fantastic event space that is Citizen Vinyl -- a combination record pressing plant, record store, café and cocktail bar (specializing in amari-based drinks) -- I celebrated the official release of my second book, Disturbing the Peace: 415 Records and the Rise of New Wave. Even though it was the afternoon of the Big Game™ -- not at all my thing but beloved by many -- a good number of friends and soon-to-be-friends came out to see and hear about the book.

As I've mentioned before, my research for the book involved some 96 interviews, and an impressive number of my interviewees opened their own personal archives and shared photos, posters, set lists, contracts and other memorabilia that helped tell the story of 415 Records and its bands in a visual way. I ended up with a digital archive of more than 700 images, 300 of which appear in the book. For yesterday's book celebration, I put together a slide show using the best from among the remaining 400-plus images. Before the event began, a sort of mini-MTV played music videos by Translator, The Red Rockers, Pearl Harbor and the Explosions, Wire Train and Romeo Void.

During the presentation, I showed video messages from 415 co-founder Howie Klein, John Thomas Griffith (The Red Rockers) and the members of Translator. I read brief passages from the book, and chatted with the gathered audience about the label, its artists and the Bay Area punk/new wave scene of '78-'86 in general.

And all of that was great fun. But what made the afternoon even more special was the fact that a number of those in attendance have direct connections to the story and stories chronicled in my book.

My friends Elzy Lindsey and Dave Baker are both from New Orleans, and both know (and have played in bands with) members of The Red Rockers. Former record company executive and publicist Mike Wilpizeski lived for many years in the Bay Area and has first hand knowledge of many of the story's principal characters. Artist Peter Thorpe lived in San Francisco in those days as well, and he designed a number of great posters for Howie Klein. And archivist Keith Bollinger ran White Noise Records, a label that -- in addition to other releases of note -- reissued the Mutants' Fun Terminal on CD in 2002.

That even one of these creative and fascinating individuals would (a) live in Asheville, (b) know about my book and event and (c) show up would have been -- that word again -- remarkable. That they all, plus many others, came out yesterday pleases me beyond my ability to express.

I'd like to thank them along with everyone else who attended, and big thanks to the staff at Citizen Vinyl, too. The support for Disturbing the Peace is very much appreciated, and it's extremely encouraging.

There will be more events associated with Disturbing the Peace. Some will be in-person, while others will be virtual/online or a hybrid of both. But yesterday's gathering will be hard to top.

Disturbing the Peace opens with a mention of "Howie Livin'," a track by San Francisco-based industrial/hip hop collective Consolidated. The track features a brief spoken-word recording featuring 415 Records founder Howie Klein. One might say that Consolidated and Howie have some history: the group's co-founder Adam Sherburne was in Until December, one of 415 Records' CBS-era acts. Another orignal member of Consolidated was James Dickson; when he worked at 415, Howie called him "Jimmy D." Consolidated went off the grid some years ago, but they've returned in 2021. The following is a story written by Disturbing the Peace author Bill Kopp, basedo n an interview with Sherburne. (The latter is extensively interivewed in the book's chapter on Until December, of course.) This feautre first appeared in SF Weekly. 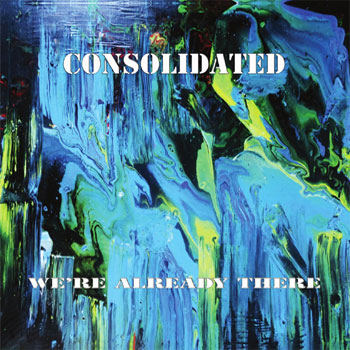 Socialism is back. Though it was widely popular in the United States in the first half of the 20th century, the political philosophy endured years in the wilderness thanks to its vilification during the McCarthy era, the "me decade" of the 1970s, the Reagan era and beyond. But the inescapable realities of income inequality have realigned popular thinking: in 2021, concepts that would have been considered fringe ideas a decade ago -- universal basic income, healthcare for all, the rights of the homeless -- are now part of mainstream dialogue.

And against that backdrop, it makes sense that Consolidated is back, too. From the late '80s into the 21st century, the radical activist/industrial/funk/hip-hop band drew notices for its confrontational, outspoken socialist worldview. The group started out in techno but morphed into something harder to pin down. Over the course of the Bay Area-based band's initial run, Consolidated explored funk and experimental sound collages; its main constants were guitarist, singer and frontman Adam Sherburne; an unfailingly socialist perspective; and a commitment to making challenging, defiantly non-commercial music.

From 1988 to 2007, Consolidated would be sporadically active, releasing several EPs in the space of a few months, and then going quiet for several years. By 2007 it seemed that the group was no more. Sherburne had directed his energies into Free Music! Stop America!, a musical collective that sought to build on the concerns of Consolidated, including oppression, unchecked capitalism, gender equality, vegetarianism, free speech, and a general dismantling of corporate structures (especially in the music industry). He was also an active part of Occupy Portland.

Bay Area-based producer-musician Mark Pistel had been a mainstay of Consolidated and a long-time Sherburne associate. Concurrent with his work in Consolidated, Pistel busied himself in various roles with Meat Beat Manifesto, The Disposable Heroes of Hiphoprisy, MC 900 Feet Jesus, and others. When Consolidated seemingly went inactive circa 2007, he continued with production, engineering and mixing work.

"I could see the collapse of the whole thing, at least on the recording end and the money end," Sherburne explains. He sought to distance himself from the machinery of the music business. "I went into underground teaching/learning on the street with Occupy, and other applications of music. Mark stayed in the game, continuing on with Meat Beat, a disco project called Hercules, and other remixing things."

So it was something of a surprise when a new Consolidated album appeared in mid-March 2021. A sprawling, dense, and characteristically demanding double LP, We're Already There signaled the return of Sherburne and Pistel's collaborative project. But the truth is that Sherburne and Pistel never really stopped working together. "Mark and I kept up this whole time," Sherburne says. Pistel "was just trying to make a go of it in whatever was left, and I was trying to develop a corrective or an alternative to it."

Even before the pandemic made The Postal Service-style remote collaboration the norm, Sherburne and Pistel were exchanging audio files. "We essentially developed a new, dysfunctional musical marriage," Sherburne says. "And that's what this whole album is." Somewhat self-effacingly, Sherburne characterizes We're Already There as "Mark sending me professionally recorded and programmed tracks, then me playing guitar or yelling into the iPad and sending back this lo-fi garbage, and then him trying to tart it up."

The album is a sampler of the many moods of Consolidated; confrontational industrial beats coexist with the irresistible funk groove of "Riffin on Jimi," the world music textures of "Music is the Sound of Life," the gauzy sound collage of "The ol' Mass Extinction Blues" (featuring a sampled Greta Thunberg speech), and the Iberian delights within "Robot Flamenco Shit." Sherburne says that compared to Consolidated's past work, We're Already There features "far less topicality, more ambiguity and openness in the places where there are lyrics, and more instrumental jams."

Still, the band that brought you 1991's Friendly Fa$cism hasn't softened its core messages. Just beneath the sultry, jazzy sheen of "The Chickens are Coming Home" there is Sherburne -- reminding us that "capitalism turns everybody into pimps, johns and hoes or some combination."

Sherburne stands behind his work on the new album, but readily admits where he feels it comes up short. Thanks to the isolation imposed upon everyone this last year-plus, he says that the one thing We're Already There lacks is "one thing that we all wanted it to have: commentary by the people."

From its inception, central to Consolidated's street-level approach has been its insistence on breaking down the barriers between performer and audience; live Consolidated gigs had music, but at their core they were designed to function as a dialogue among all participants. That meant the mic got passed around. And if the revived group decides to tour -- at present only two live dates are scheduled -- concerts will maintain that approach.

For most musicians, Sherburne says, touring bands "have not been a going concern for over a quarter century." But he'd nonetheless like to get out there and play some gigs. "We damn sure should try to go out and lay it on a new generation once, at least in a pretty spread out thing, have a discussion and maybe record that," he says. "I'd love for us to get out and do all the big cities and some small towns, hand out the mic, have a good time and live it to the fullest."

And collaborative multimedia is on Sherburne's radar as another way to connect with a like- and open-minded audience. In addition to recording and releasing more music, he's interested in "redirect[ing] my discussion with Mark from the way that you heard it on this album into something that's more like what's happened the last 20 years: cheap, fast-moving, little iPhone docs." His vision calls for anyone so inclined being able to upload their own music, or take part in live, realtime jams.

The group's 1989 debut EP ˇConsolidated! featured a track called "Howie Livin'." Built around a sample of 415 Records founder Howie Klein posing a rhetorical question, the track still works as a tidy encapsulation of at least part of the Consolidated philosophy: "If music is just inspired by a desire to make money, how interesting could it really be?" With We're Already There, Adam Sherburne and Mark Pistil continue on their journey of making interesting, provocative music.

Entry: August 18, 2021
Most of the chapter titles as noted in the book's Table of Contents are self-explanatory: they cover one of the bands that released music on 415 Records, or -- in the cases of the Columbia-era groups -- they focus on a specific album or EP. Most of the other chapter titles hint at what's to be found within. But I thought it would be useful to explain them a bit. Here goes: More updates soon!