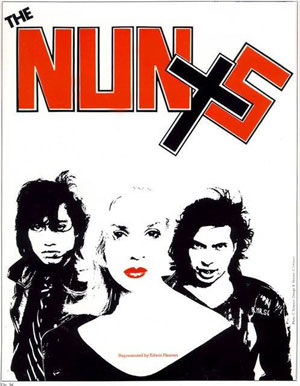 Some 40 years on, someone with a passing familiarity with 415 Records might think of it as a new wave or even "college rock" record label. But 415's roots are firmly planted in punk. "The Nuns were the first," says Howie Klein. "The Nuns were the very first band we signed."

Thanks to his friend Danny Fields, Howie had seen The Ramones when he was still in New York City. And he recognized that their influence would quickly spread. "They were like the Johnny Appleseed of the punk movement," he says. "Everywhere they'd go and play, new bands would pop up." And existing bands felt that influence as well. "You could just see that [bands] would start dressing more like the Ramones, and maybe their music would get a little bit more like that," Howie says. "The Ramones were gigantically influential."

And when Johnny, Joey, Dee Dee and Tommy played their first show in San Francisco, their impact was almost immediate. "One of the bands that they had influence on was The Nuns," says Howie. "And they got extremely popular."