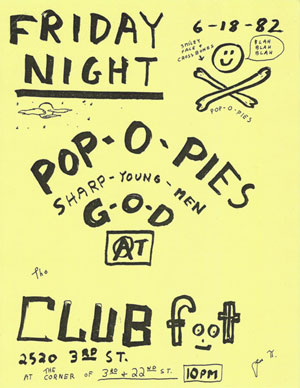 Many of the artists who would release their music on 415 Records were thoughtful, earnest and passionate about their creative efforts. When Joe Callahan rechristened himself Joe Pop-O-Pie, he embarked on a path that was equal parts silly and irreverent. Taking the piss out of both the punk scene and a hallowed San Francisco musical institution, The Pop-O-Pies could make it challenging to take their music seriously. They clearly had fun poking a metaphorical finger in the eye of those who took themselves -- and the music scene -- with any kind of seriousness at all.

Disturbing the Peace's chapter on The Pop-O-Pies is based upon interviews with Joe "Pop-O-Pie" Callahan and Mark Bowen, plus insights and memories from producer David Kahne, Hugh Brown and 415 co-foudners Chris Knab and Howie Klein.