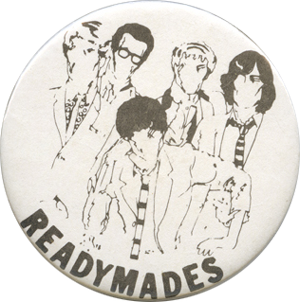 As their choice of band name would telegraph, The Readymades combined a more literate lyrical approach with the raw power of punk, helping to connect the new music with the artistic sensibilities of Andy Warhol and Marcel Duchamp. Singer/guitarist Jonathan Postal showed that punk could be lyrically sophisticated without losing its edge.

Postal had been the bass player in Bay Area punk pioneers The Avengers. "I was one of the founding members," he says. He and singer Penelope Houston met at the San Francisco Art Institute. But in short order, Postal was dismissed from that group. "His musical concepts didn't jibe with mine," says Houston. "He brought some songs to us, and frankly I didn't want to sing them. We did a couple shows with Jonathan -- three, four, maybe five; I don't know -- then we just decided it wasn't a good fit, and we threw him out of the band."

Disturbing the Peace's chapter on The Readymades is based upon interviews with Jonathan Postal, plus insights and memories from Penelope Houston, Queenie Taylor, Jello Biafra, Ginger Coyote and 415 Records co-founders Howie Klein and Chris Knab.