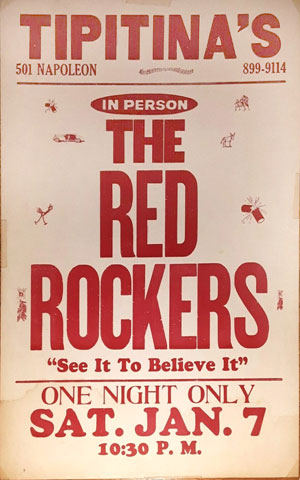 In 1979, The Red Rockers were an unsigned, left-wing punk band playing bars in New Orleans. By 1984 they were a world-class pop group, with popular videos on MTV and a national tour supporting U2. Along the way, they endured defections, setbacks and charges of selling out. But they left behind three albums filled with enduring music that reflected the spirit of the times.

The group's earliest gigs had them billed as The Rat Finks, but they soon renamed themselves after "Red Rockers Rule," a song by punk band The Dils. The Red Rockers played the Southeast circuit, traveling to Austin, Atlanta, Athens and other markets where the new music was catching on.

Bassist Darren Hill says that he was "the de facto leader and mastermind behind the band and our image and everything we were going to do. So, I decided we were going to go record our first three songs and put out an EP." That record would include "Guns of Revolution," "Teenage Underground" and "Nothing to Lose." All three songs were styled explicitly upon the sound -- and political perspective -- of The Clash. "Once we started in earnest with our songwriting and starting to get better at it and develop what we wanted to convey and what our image was going to be," Hill says. "It was definitely left-leaning. What I set out to do was to make us an American version of The Clash."