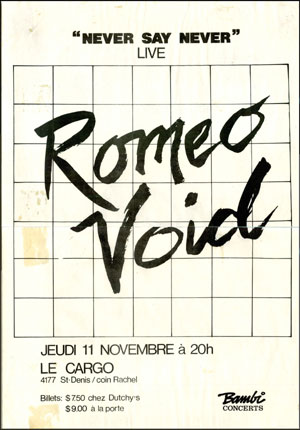 Sex and sax. Certainly Romeo Void was always about much more than those two things, but Debora Iyall's lyrics (often addressing forthright sexuality) and the band's music (featuring the distinctive saxophone work of Benjamin Bossi) were defining characteristics of the band.

Debora Iyall started going to shows at the Mabuhay Gardens. She recalls seeing Patti Smith with Lenny Kaye, and being fascinated. "I got into punk rock via Patti Smith," she says. Iyall had been one of those legendary few who witnessed The Sex Pistols' final show, at Winterland in January 1978. The Avengers were on the bill that night as well. And when Iyall enrolled at the San Francisco Art Institute, she soon encountered the locker formerly used by Penelope Houston. "She had already graduated," Iyall says. "But her old locker had the lyrics to 'We Are the One.' It was like,'Oh, that's Penelope's locker, from The Avengers?' That was a big deal to me."

In the late '70s and early '80s, new bands were popping up all over San Francisco. "A lot of us didn't know how to play our instruments very well," she admits. "And those who didn't play instruments had never sung very much, or very well. But we were all like, 'We have something to say.'"