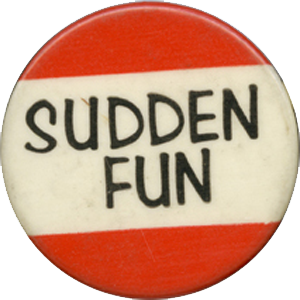 Sudden Fun was the name of the band in which drummer Derek Ritchie and three friends played starting in 1977. Ritchie says that Sudden Fun and other like-minded bands were a refreshing change from the other scene happening in the Bay Area. "What was going on was disco," he says with a sneer. "On Kearny Street in San Francisco, there was this disco club. You're seeing all of these dudes with their fucking silver lamé jackets, their gold medallions, and hairy chests: white guys with afros, bell bottoms, and platform shoes. Then all of a sudden, we come out, and we've got black hair, black clothing. It was just a completely different scene, a complete revolution against the fucking disco generation."

Disturbing the Peace's chapter on Sudden Fun is based upon interviews with Derek Ritchie, plus insights and memories from 415 Records co-founder Howie Klein.