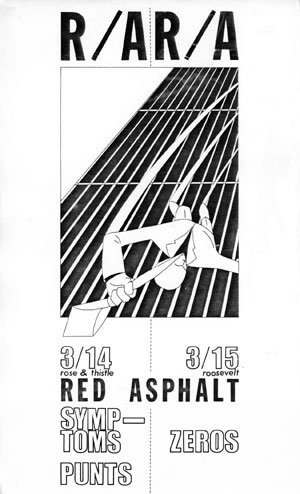 "When we first played at the Mab, people were throwing stuff at us," drummer Bobby Insalaco says. "It was a totally new environment. I didn't understand what the hell was going on." Luckily it was only popcorn being thrown. At another Mab gig -- one filmed by Target Video -- the stage's back wall was emblazoned with a bullseye logo, and the audience took that as an invitation. "People were throwing bottles and ashtrays," Insalaco says. "I was ducking things all night long. But I was having fun."

Disturbing the Peace's chapter on The Symptoms is based upon interviews with band members Bobby Insalaco and Robert Madden, plus insights and memories from Meg Brazill.