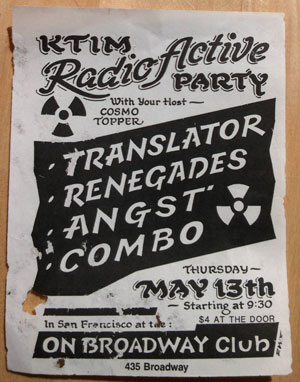 The idea for Translator came about on a Transpacific flight. Guitarist Steve Barton and drummer Dave Scheff were on their way back to the States after a concert tour in Japan. "Steve had got [us] a gig in a Beatles show called Beatle Fever," recalls Scheff. "It was a Beatles tribute band, with a slideshow and stuff. Sort of a Beatlemania without being Beatlemania."

A pair of L.A.-based promoters ("Let's not say, 'sleazy,'" implores Scheff) booked Beatle Fever for a three-month tour of the Far East. "We were getting a couple hundred bucks U.S. a night for each show," Scheff says, "which was probably nothing compared to how much they were actually making."

With a weary laugh, Scheff recalls how it all went wrong. "The promoters had used photographs and pictures of set lists from Beatlemania to promote us." Beatle Fever was being sued, and the band members were notified that they had to leave the country the next day.

After a hastily arranged mea culpa press conference, Scheff says that the band members "were unceremoniously shuffled off to the airport and sent home." On the long flight back to Los Angeles, Scheff and Barton got into a discussion. "I believe it came from me," says Scheff. "I said to Steve, 'We should do our own band, because you write all these great songs.'" Barton agreed, and the two wondered aloud what to call this proposed band. "To this day, we aren't sure which one of us said it," Scheff admits. But because they had been in Japan, and neither of them spoke the language, the idea came to them: Translator.