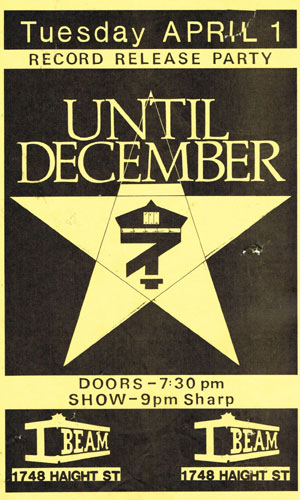 415 Records' eclecticism was one of its defining features. The label's catalog included everything from punk/reggae (The Offs) to Beatles-influenced rock (Translator) to straight-out punk (The Nuns) to catchy, hard-driving power pop (SVT) to synthesizer-based music (The Units) to monster-movie madness (Roky Erickson and the Aliens) and more. But even among that varied roster, Until December is an outlier.

A trio churning out dance singles aimed at least in part at the gay disco scene, Until December came on like Depeche Mode, armed with roaring electric guitars instead of synthesizers. They neither sounded nor looked like any of their 415 Records stablemates. And while the group left behind only one album (plus another album's worth of singles and dance mixes) they burned brightly before flaming out. They may have been too far ahead of their time.

Disturbing the Peace's chapter on Until December is based upon interviews with band members Adam Sherburne and Bryan Weisberg, plus insights and memories from Dan Levitin, Kevin Hunter, Bruce Dickinson, Denise Sullivan and 415 Records co-founder Howie Klein.