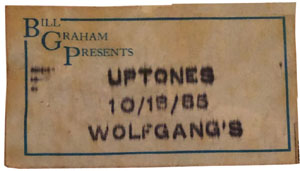 Exemplars of 415 Records' eclectic approach to music, The Uptones were avatars of the Bay Area ska movement. They had the look, the sound and the professionalism needed for widespread success. They also had a fiercely dedicated following. But what made The Uptones even more remarkable was the fact that they were basically kids, not seasoned young adults.

It does something of a disservice to pigeonhole The Uptones as a ska group; their musical aesthetic wasn't limited to the reggae variant. They did, however, have the distinction of coming on the scene ahead of most every other ska band in North America. "There's a tradition in Berkeley going back many decades of people being a little bit ahead of the curve," says vocalist Erik Rader. "My brother and I used to always listen to Howie Klein's radio shows, and we found out about things before a lot of other people."

Disturbing the Peace's chapter on The Uptones is based upon interviews with band members Eric Din, Erik Rader and Paul Jackson, plus insights and memories from Sarah Cain, Denise Sullivan, Joel Selvin and 415 Records co-founder Howie Klein.