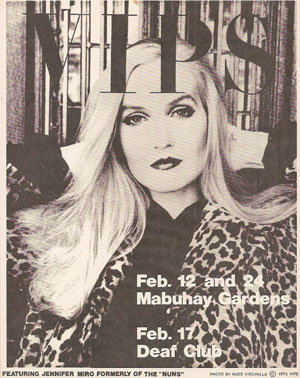 In the arc of pop music history, The VIPs might rate as little more than a footnote, a short-lived project fronted by singer and keyboardist Jennifer Miro during the period between her first and second stints in The Nuns. During their time together, The VIPs recorded only a few songs. But what they left behind suggests their unrealized potential for wider success.

Nuns bassist Pat Ryan says that the idea for The VIPs arose when The Nuns were doing an East Coast tour. The band wasn't getting along, and "Al [Escovedo] always had one foot out of the door anyway," says Ryan. Before a gig, Ryan spied a Gibson Explorer and picked it up and started playing. Jennifer Miro had only heard him as a bassist, but when she realized Ryan's talent on guitar, she suggested they start a new group. "Jennifer was prolific in her writing," he says. "And we both always wanted to do different things."

Disturbing the Peace's chapter on The VIPs is based upon interviews with Pat Ryan and Randy Gzebb, plus insights and memories from 415 Records co-founders Howie Klein and Chris Knab.