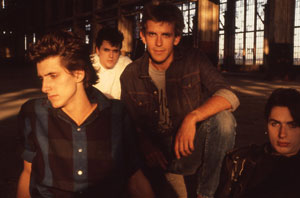 The Avengers, Hunter says, "were kind of the heads of the 'we were backstage' crew. And they actually were backstage." But plenty of others who weren't still laid claim to having been there. "You'd hear that," he laughs, "and everyone's eyes would just roll."

[Wire Train was orignally known as The Renegades.] The Renegades, Hunter says, were definitely in the not-backstage group. "There were the post-punk bands; there were lots of kinds of depressive, clad-in-black groups. We were probably the poppiest band in the whole bunch." He says that The Renegades worked hard but didn't take the whole thing too seriously.